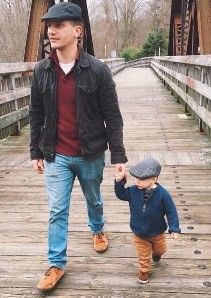 It’s May! The month of Mary, the month of Memorial Day, the month where you can really start to get a “feel” for summer. The school year is in its final stages. Teachers and students alike are very busy, but also starting to see the light at the end of the tunnel. As for me, while I am still looking forward to the more relaxing summer months, May brings much planning for September. This year, planning for the next school year brings a new sense of bittersweet excitement. Last month, I registered my son as a student in St. Joseph School’s 2017-2018 Pre-K 3 program. Exciting, yes, but also bittersweet in that this is another “first” that means he’s no longer that little “burrito” we brought home from the hospital three years ago.

Before I became principal of St. Joseph School, my wife and I always talked about schooling for our future kids. I knew I wanted them to come to St. Joe’s. Some of the reason is rooted in every parent’s desire to give their children the happy memories they had growing up. While my wife will tell you that I’m definitely a strongly nostalgic person, the reason my son will be coming to St. Joseph School next year goes beyond my own connection to the school, both professionally and personally.

He will be at St. Joseph School because of who he will be as a result. He will be a child who has been brought up in a supportive, faith-filled community. He will be a child who was able to experience, first hand, what a small, nurturing community is in a world that continually becomes larger and less personal. He will be part of a close-knit cohort, made up, not just of his classmates, but of children throughout the entire school, whose families know each other well and have gone through many experiences together. From serving others in their community to awkwardly figuring out what to do at their first middle school dance, they will share many personal moments with each other and won’t just be “faces passing in the hall” or “those kids on the bus”. He will see parishioners and school families assisting in his educational experience. Volunteers serving lunch, running fundraisers, or helping out at events will show him that his community is invested in what he and his school are doing.

He will also know how to take notes, study for a test, write cursive, do math in his head, and (according to the data) average a grade level (or more) higher in language arts and math. He will know how to approach a teacher with problems or concerns. In college, he will know how to successfully adapt to larger environments and new people from his experience of transitioning to high school. He will carry memories of Octoberfest, class Rosaries at Mary’s gazebo, and Christmas concerts in the church to take with him into the next chapter of his life.

Before he was born, it was an easy choice where Noah would be going to school. Now that the day is quickly approaching, I have to choke back the tears, realizing he is no longer the little bundle we brought home three years ago. The positive side is that we have another bundle due in September (hurray for 2am feedings and diaper changing!). As for Noah, while I technically won’t be far away, this is another step in his metaphoric journey along the path to wherever God has planned for him. At least I know he will be well-prepared.

Send us a message and we'll get back to you as soon as possible!

STAFF CONTACTS
PORTAL
Back to Top